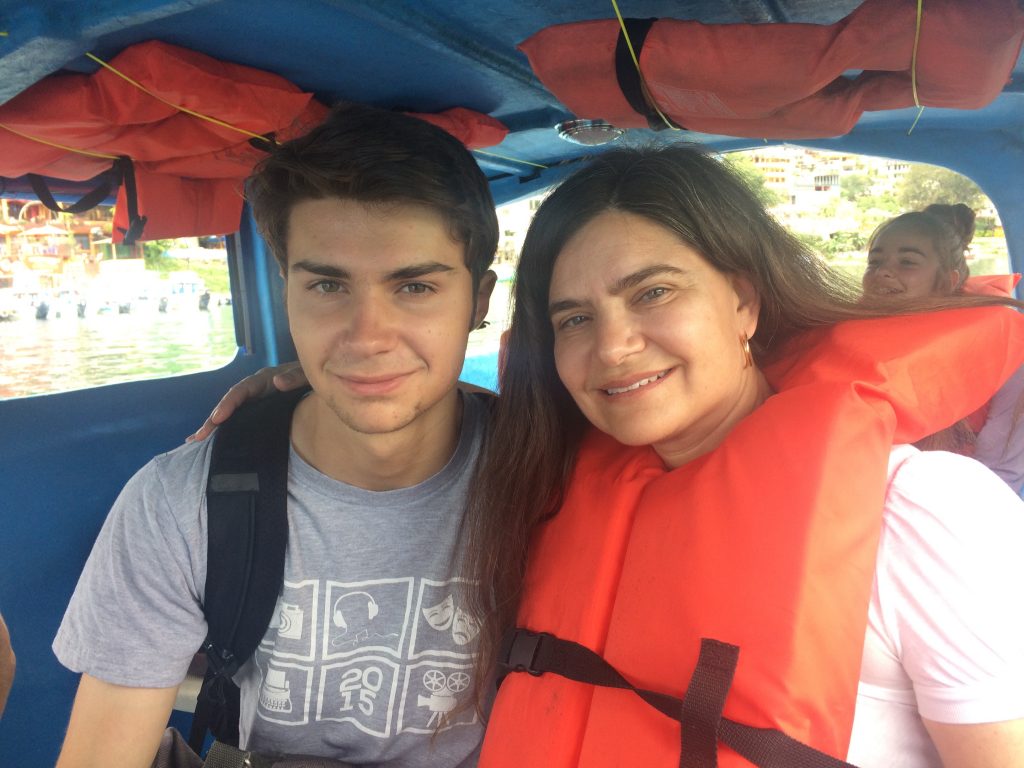 I knew something was up when I saw the meat mallet out on the counter.

“Did you use the meat mallet for something?” I ask my son.

“Oh yeah,” he says, with a smile, running into the other room to get something.

He returns with a smashed brown pulpy mass, about the size of a small lime but looking more like a putrified fig.

I examine the rough surface in my hand.

“It’s a Buckeye pod. You know, those huge things that hang from the tree in back? What were you doing with that?”

“Oh. I found some on the lawn. I wanted to see what was inside it.”

I’m glad. He’s still curious about the natural world. For all his time on the computer in Zoom classes and playing games, I wonder if he’s become immune to that.

And, I am reassured. TJ may be turning 20 today, but he hasn’t changed. He’s always loved taking things apart, whether it’s dissecting worms or old cellphones. Five years ago when my Ipad crashed, he delighted in hammering it apart and inspecting the innards. We gazed at the shiny chips in silence as if we were considering a sacred icon.

I’ve lost count of the times he’s disassembled his tower computer with the excuse he needs to add an additional fan or better graphics card. The first time he did this I panicked at the sight of all the parts and screws spread out across the dining room table. Now I know he is capable of putting it all back together about as fast as it takes me to do the weekly shopping.

I do a little Googling and I can’t wait to tell TJ that Buckeye seeds are poisonous. Buckeye trees like ours are native to California and, according to Wikipedia, native Americans used the poison to sedate fish to make them easier to catch. TJ and I don’t have a ton of topics to discuss, so I’ll jump at any juicy fact to get his attention.

It’s a few days later and TJ isn’t impressed by my knowledge about Buckeye seeds. He barely changes expression as I mention the word poisonous.

Instead we talk about air quality. He tells me his good friend can’t play tennis right now due to his lung condition and sensitivity to the bad air. Actually, no one should be playing tennis right now. It’s a shame, because tennis is TJ’s main exercise. I would have never imagined that in 2020, TJ’s sophomore year of college, he would be living at home and we would be in semi-lockdown due to a pandemic and further isolation due to bad air quality.

“Did you know Mom, that the hair in your nose is thicker than the hair on your head?” TJ says suddenly. “Your nose hair is very good at filtering particles.”

Later, I’m unable to confirm this information on the web, though it sounds perfectly plausible.

That evening I ask TJ, “Where did you get that nose fact? From Reddit?” I’m feeling proud I can drop the name Reddit into the conversation.

The kitchen is our common space. We meet there several times a day. Some days TJ rummages around the cupboards and fridge and creates his own meal, a fried egg and cheese sandwich or a veggie dog on a toasted bun. Other times, he asks if I can make his meal. I’m happy to oblige. He won’t be around forever. Someday the pandemic will end and he’ll move into an apartment of his own.

Today the smell of fresh bread fills the kitchen. I’m making bread in the bread machine. This bread will go well with the shakshouka (stewed tomato dish) we will have for lunch.

I’ve become obsessed with finding vegetarian dishes my son likes. My pandemic brain runs daily loops of possible menus: mushroom risotto on Monday, pesto tortellini on Tuesday, manchego mac ‘n cheese on Wednesday. I’m overjoyed when I talk to TJ’s brother on the phone and he tells me about a new recipe he’s found for spicy tofu tacos (“TJ will love it Mom!”). Meanwhile, trips to the grocery store always involve a stop at the veggie-based frozen food section. We’ve tried everything from Beyond burgers to “fishless” fillets.

TJ became a vegetarian his senior year of high school thanks to an attractive, smart girl in his class. That relationship stayed platonic, but TJ stuck with his new diet. He’s choosing this path not primarily for health or animal welfare reasons, but to reduce his carbon footprint. I respect that and now I eat very little meat too.

While I cook we talk about our cockatiel. For 12 years Fluffy was a constant presence while we were cooking or eating.

“I thought I heard him flying around the other day,” TJ says.

“I thought I heard him whistling,” I say.

There are still breath marks on the one kitchen window I can’t reach, little smudges Fluffy left behind while perching on the sill and observing the backyard.

I replay Fluffy’s last day with us back in June, finding him struggling to breathe at the bottom of his cage. His little body seemed crumpled like a tissue, his normally erect tail and wings flattened. Then I remember how TJ cupped him in his hands on the way to the vet. Fluffy had one final convulsion that caused him to flutter and crash onto the car floor. His tiny eyes, two black dots always so bright and alert, closed into tiny slits. Later we buried him in the garden outside TJ’s bedroom window.

We don’t talk about that sad day. But I know we are both thinking about it.

How did my son become an adult, no longer a teen? It’s the small stuff that hits me. It’s finding him ordering fancy Moleskine journals to take notes for his classes. I remember all the years when I had to buy his school supplies. It’s noticing the way he’s lined up his shoes neatly under his bed. I used to tidy his room. It’s seeing him pull on his vest to go skateboarding, timing his ride so he can watch the sunset. I used to nag him to go outside. As the saying goes, in parenting the days are long but the years are fast.

The other day I was driving to the store and when I reached the slight crest at our corner I saw a young man whizzing by on an electric skateboard. Wow, I thought, he’s going fast. Then I looked again and realized it was TJ. Since we both hardly leave the house these days, it felt strange seeing him out of context. I decided right then that for his birthday, I’d buy him a better helmet…and a Costco-sized wheel of manchego cheese.