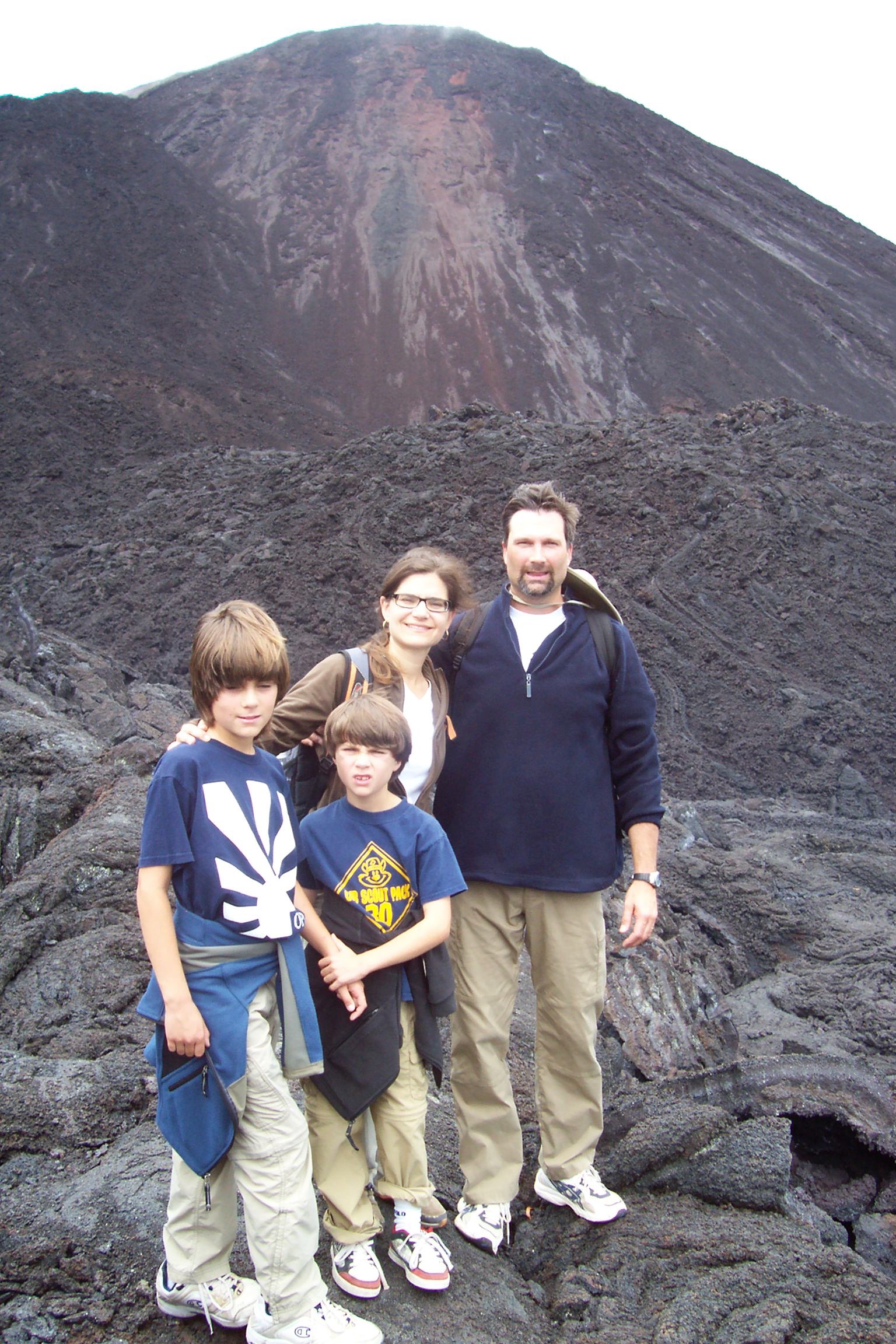 We stood on a small precipice of brittle rock, surrounded by pools of orange, bubbling lava. The smell of sulphur hung in the air. My husband looked alarmed. My kids looked fearful. “I’ve made a terrible mistake,” I thought. “I’ve put my family’s life in jeopardy. Why hadn’t I researched this? We are going to die on the side of this volcano.” I was shaking.

The trip to the volcano had seemed like just another tourist attraction when we read the brochure. It had a large photo of a volcano with billowing smoke and a description that explained that shuttles left early every morning for a day-long trip to the famous Volcan Pacaya. We had been to Hawaii and imagined the experience would be similar. There, tourists can view the smoke and active lava fields of Kilauea from a safe distance. Hand rails prevent anyone from stepping anywhere near the lava flows. Guatemala, however, does not seem to share the same safety concerns.

The morning had started out predictably. Just as the brochure said, a van pulled up to our hotel at 6 am. My husband, my two sons, ages 8 and 11, and I squeezed into the van along with a dozen other tourists. We soon left the comfortable colonial town where we were staying and turned onto curvy mountainous roads. The air was stuffy and I prayed I wouldn’t get sick on the hour and a half journey. Upon arriving in the small town at the base of the volcano, we were greeted by local residents selling trinkets and snacks. We bought a few drinks and followed our guide to a path at the edge of town. Soon we began climbing up a steep mountain path. Tall trees and vegetation grew along the sides of the path. Tourists on horseback occasionally passed us. “Why didn’t we take horses?” one of my kids grumbled. “How much longer?” We stopped a few times to rest and I wondered if the climb was too much for my eight-year-old. We were all perspiring as the sun climbed steadily in the sky. At one point our guide mysteriously broke off a few small branches of a tree and stuck them in his backpack.

Eventually, after more than an hour of climbing, we left the dense vegetation and saw a barren black slope up ahead. We walked to the slope and our guide explained that this was hardened lava from a flow about a month ago. He stepped onto the black rock, a little uneven in places, and signaled for us to follow. We walked a little farther. This lava was fresh three weeks ago, he said. The ground was brittle and some of it had dried in strange ways, leaving crevices. At one point my foot slipped and I fell a good foot into a hole. The rock cut my leg and I was bleeding a little. But I was just happy I hadn’t stepped onto running lava.

Against my judgement and not wanting to appear weak, I followed our group and the guide farther into the lava field. Our guide had obviously staked out the route and knew just where to led us over rock that had hardened sufficiently. Finally, he stopped and proudly told us we were on a lava bed that was only a week old. By this point, we were on a high precipice, looking down at fresh lava running by us. The guide laughed and pulled out the branches he had broken off earlier He stuck them in the hot lava and stirred them around. Suddenly his hat blew off and, shocked, we watched as he jumped down, inches from the lava, to retrieve it. At that point, I had lost trust in our guide and couldn’t wait to get back to solid land. My family seemed to concur as they looked back at me with wide eyes.

The trip to the volcano was by no means our reason for coming to Guatemala. We had come two weeks earlier with the goal of helping build a bathroom for a school in a rural village in the Western Highlands above Lake Attitlan. We had spent 10 days in the village, meeting the local families, playing with the kids, and falling in love with the beauty of the country. At various times those ten days I had experienced a few second thoughts, much as I did up on the volcano. I worried that my kids might fall into the large hole next to the construction site, I worried about our dangerous bus rides up and down the mountain to the village each day, and I worried we might all get food sickness. I had calmed all my worries, however, with the thought that these were risks I was willing to take in order to show my kids the world. They would be forever changed by seeing and meeting people so different from themselves. Indeed, the kids did learn a lot and our time in the village ended well. The worst thing that happened was a few mosquito bites. Now, though, with only a few days left, we decided to do more touristy activities, like the volcano.

As it turned out, getting off the volcano was nerve-wracking. As we turned to leave for solid ground, another group of about 15 tourists began picking their way across the lava field toward us. Since there was only a narrow section of hardened lava to cross on, we had to squeeze by them, hoping not to slip into a crevice like I had on the way out. When we finally reached dirt and trees I felt relief pour over me. We practically skipped down the mountain back to the van. I hadn’t planned on this adventure when we signed up to build a bathroom, but it gave us a story we could eventually laugh about for years to come. We all agreed we would love to come back to build another bathroom, but we would never climb another volcano.

Now, 9 years later, we are ready to embark on another trip to Guatemala. We are going back to the same village where we built the bathroom. On the one hand, we know this village and its people. On the other hand, we aren’t sure what awaits us. There is talk about building a fence along the basketball court so kids don’t plummet six feet off the side into the field below. In addition, we’ll be playing a lot with the kids, trading English, Spanish and Quiche expressions. My son hopes to film a documentary and I hope to build relationships with a group of women who make Christmas ornaments we sell here in the U.S. We are ready to take in the beauty of a country rich in many things we don’t have here in the U.S., especially time. We are eager to slow down, learn, listen and share our lives with our Guatemalan friends.

2 thoughts on “Journey to the edge of the earth”