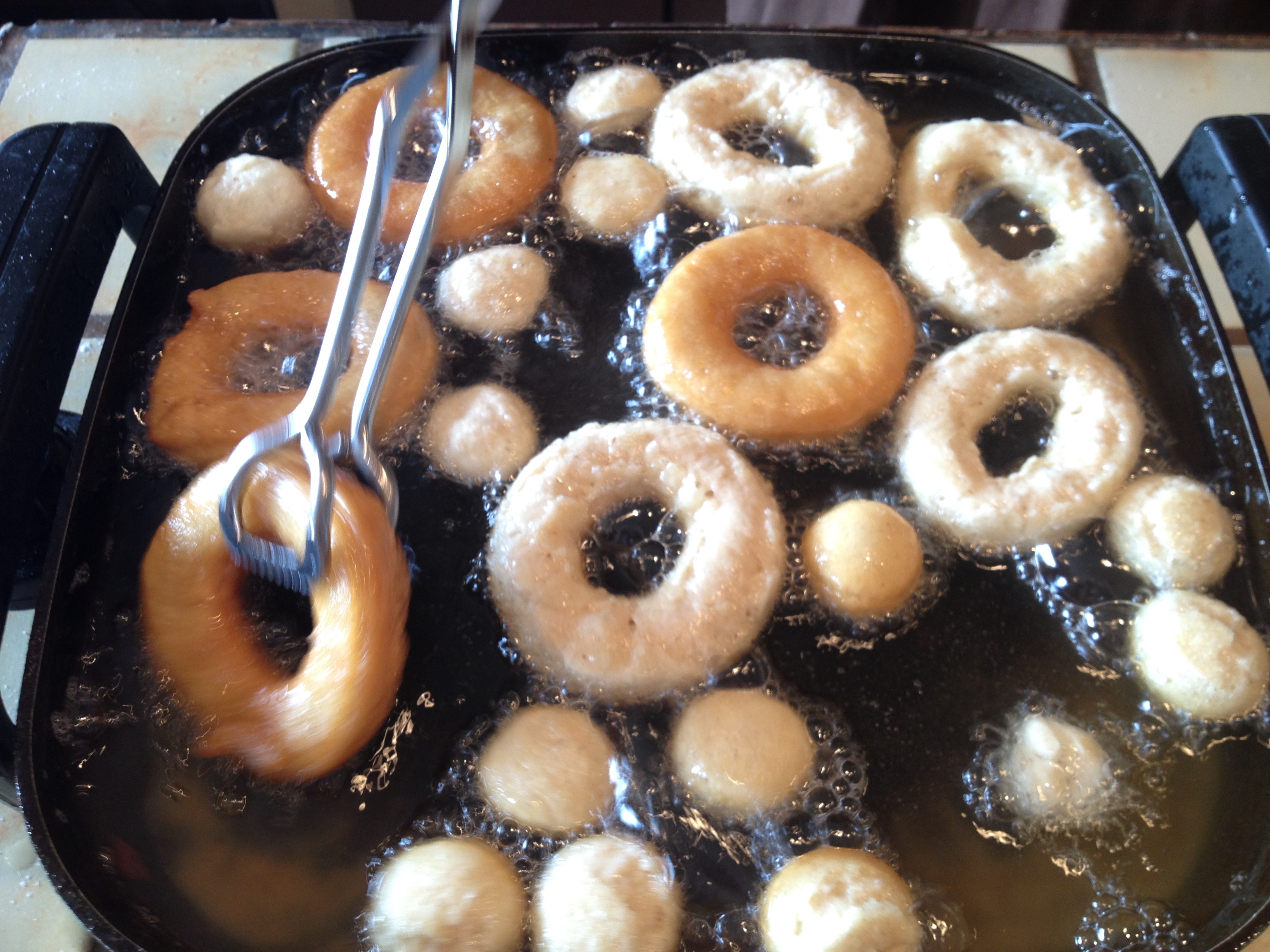 “It’s national donut day,” my son announced to me this morning as he was scrolling through his phone.

“We should call Grammy,” I said. “She’s the donut queen.”

For years my mom has made donuts from scratch, and before that her mom made donuts. We love them. In fact, when I was growing up donuts were the number one demand we had for my grandma whenever she came to visit from South Dakota. We wouldn’t even let her unpack her suitcases before she had spent a few hours in the kitchen making donuts. (My mom was prepared with all the ingredients.) There’s nothing quite like a hot, sugary donut, straight out of the deep fryer.

Making donuts is a production involving a team of cooks. My mom begins early in the morning, mixing the buttermilk dough. The dough needs to sit in the refrigerator for two hours. Then she sets up a staging area and assigns me and my kids a task. One of us gets the task of rolling out the sticky dough and cutting out pieces with a donut cutter, a round aluminum ring with a hole in the center. Another one of us drops the dough rings into a deep fryer filled with oil. Someone else will monitor the cooking donuts and flip them so they evenly brown in the oil, then remove them and place them on paper towels. Finally, one of us finishes the task by rolling the cooked donuts in a mixture of sugar and cinnamon and placing our finished product in my mom’s gigantic lime green circa 1970 Tupperware container. About this time my dad will wander in, ready to taste-test the results.

After a few too many donuts, washed down with milk, we all feel a little ill but quite satisfied. The only thing that has been harder on my stomach was the time a friend and I made onion rings in high school. My friend, who was from Georgia, had received a large box of sweet Vidalia onions in the mail, and we cooked the whole thing–then ate far too many.

Today some people talk about “slow” food, the production of traditional food using local ingredients. My mom and grandma were doing this kind of thing long before there was a word for it, with an emphasis on the slow and a focus on sweet. Around the holidays, my grandma made her own candies, everything from peanut brittle to “hooch,” a caramely, buttery candy I’ve never seen anyone else make. She and my grandpa especially prided themselves on their popcorn balls. This was a slightly dangerous affair involving mixing fresh-popped popcorn with caramel and shaping this hot, gooey mixture into a ball. Once finished they would deliver their treats to local nursing homes. For my wedding my grandma spent days making hundreds of creamy fondant mints in pretty blue, violet and pink shades. She carted them all out on the plane and between that project and making my wedding quilt, she was exhausted—a rare state for my indefatigable grandma.

My mom has kept many slow food traditions alive and, just like a good haiku poem, they serve to mark the passing of nature’s seasons. A fresh strawberry pie means its springtime. Blackberry jam is late August. Cinnamon rolls are Christmas morning. Along the way, I’ve gotten involved and so have my kids. When the kids were younger, we used to worry about having an accident with the 400-degree oil for the donuts. Amazingly, no one has ever been burned. On the other hand, we’ve been scratched up badly picking blackberries. And once, I almost started a fire with my parents’ old electric ice cream maker—the kind you put rock salt into. I had brought it to my son’s kindergarten class to make ice cream with the kids and possibly because of its age, it began to smoke. It was churning away and smoke filled the whole classroom. I turned it off and we ate mushy ice cream. Fortunately the kids didn’t care.

Today slow food and especially donuts are trendy. There are all kinds of fancy donuts with special fillings and flavors. I’ve even seen bacon donuts—bleech! My grandma’s donuts are basic, just a plain, tender dough rolled in cinnamon and sugar. I don’t know where she got the recipe. She grew up on a farm, the daughter of German immigrants. I doubt she learned it there, though it’s possible. What she did learn, though, was not to be afraid of big projects. She could do just about anything involving food or crafts. Wallpaper a room? No problem. Make Venetian blinds? Easy. Organize a church tea for 100 women. Fun! She passed on that intrepid spirit to my mother and a little bit to me. I think she’d be very pleased that in 2017 we are still making her donuts. 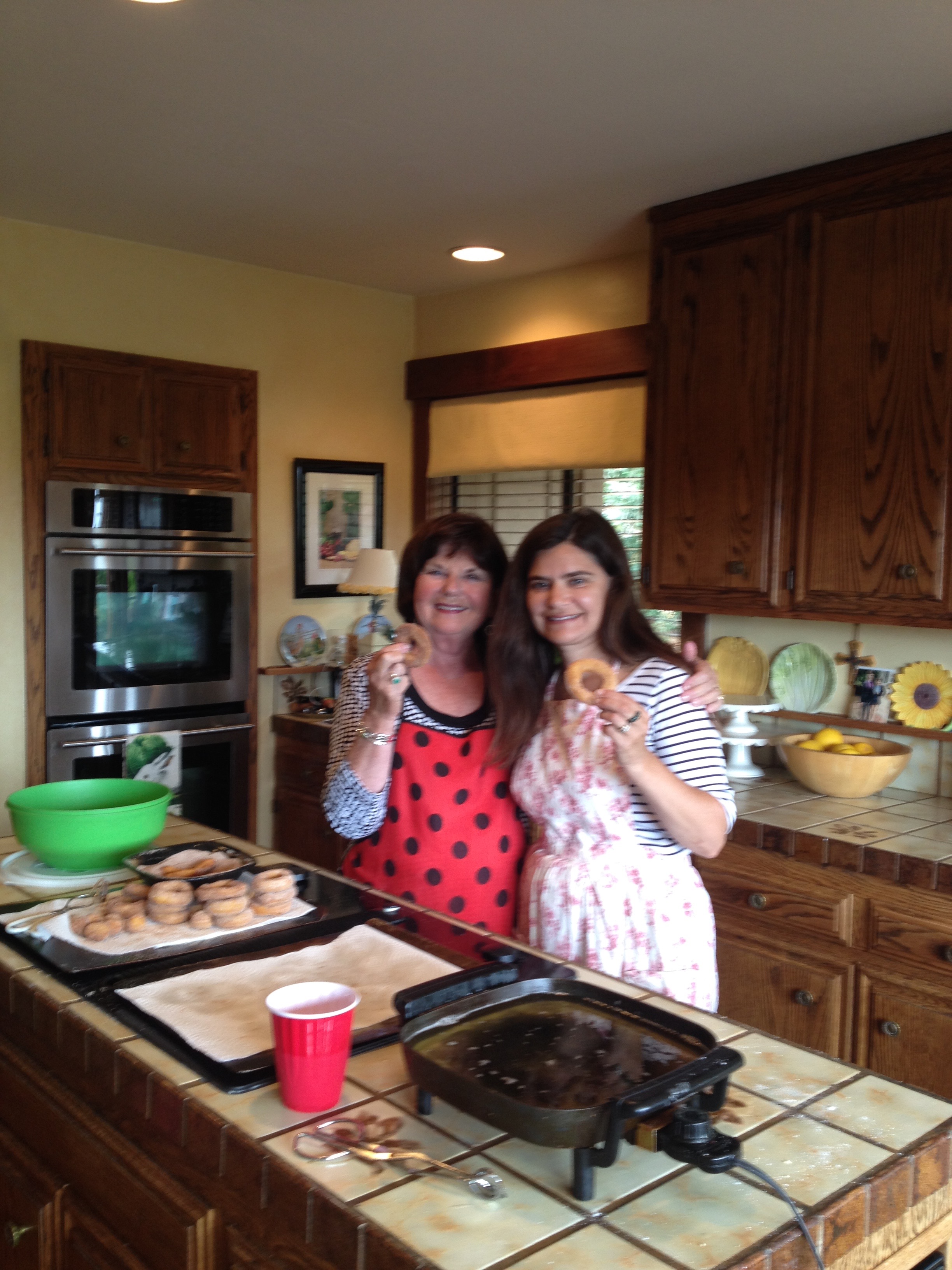 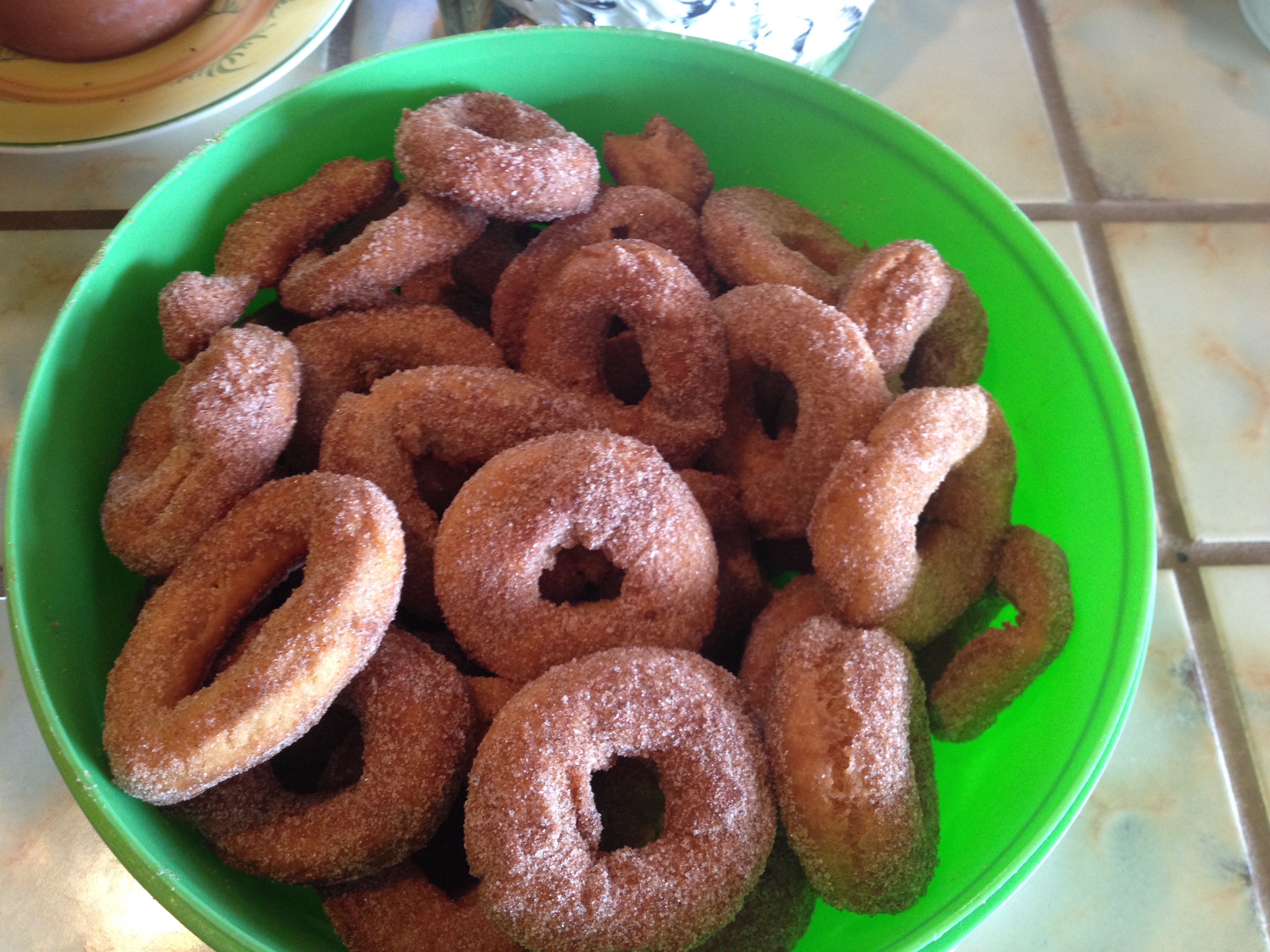