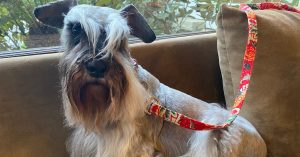 Romeo’s fluffy white beard is matted with clumps of sticky peanut butter and his breath smells of Pupperoni dog treats. As soon as Sara leaves, he runs to his water bowl in the kitchen and drains it. Then he lays down in his spot in the living room for a nap. He’s just finished an hour-long session of dog obedience training.

This dog training is tiring stuff, both for Romeo and for me. We’ve completed a handful of sessions with Sara, a dog behavioral specialist. (If you want to see a super-short video of Romeo learning to relax on command, scroll to the bottom of this post,)

For the most part, Romeo likes the sessions. He gets lots of treats and attention. Sometimes he gets frustrated, forgets his task and barks at me. But he’ll do almost anything to get a treat and, with a little guidance, he gets back on track. Sara thinks he’d work all day and make himself sick with treats if we let him.

Today was a banner day because he performed so well on his current “trick” (laying on his mat) that he no longer needs the clicker. (If you don’t know what a clicker is, it’s pretty simple. It’s a little device that makes a click. You can hear the click in the video at the end.) Now when Romeo returns to his mat, I don’t need to click to reinforce the behavior. I simply say “yes!” and give him a treat.

Today we also worked on a “chain of commands.” Instead of just doing one behavior and getting a treat, he had to perform several—lie on his mat, touch his nose to my hand and lie down on the carpet. Sara instructed me to vary the order of behaviors so he has to use his brain and pay attention to my commands.

I’ve learned that patience is the most important requirement in dog training. Sometimes Romeo is so eager for the treats that he simply stares at my treat hand and barks. I wait, and wait, and wait some more. I try not to make eye contact as that makes him bark more. I’m about to give up and call it quits. I wait a whole minute or two it seems. Then, suddenly, Romeo remembers my command. Or maybe he just gives in and performs, knowing what I want all along.

If Romeo is pushing back a little, I am too. I’ve been hesitant to act on some of Sara’s suggestions. She wanted me to get a white noise machine to help screen out the street sounds that make Romeo get agitated as he perches on the couch all day. She also wanted me to apply opaque transparency film to the living room window so he couldn’t see the people and dogs walking by, which really get him going. I finally got the white noise machine (which only helps a little). I haven’t yet applied the film.

The point of all this is to have a bit mellower dog who is more relaxed in general, but especially when people come over. As it is now, all it takes is for someone to open a car door outside and he goes bananas. When they ring the doorbell, his bark reaches a new level of ear-splitting pitches. I don’t mind his efforts at guarding the house, but I’d like to help him relax when we both know it’s just a friend. Thus, the hope is that one day he’ll learn to tone down his reaction and even sit nicely on a mat while our guests enter the house.

We got Romeo seven years ago from a Mexican family in Modesto. One Saturday morning my boys, my mom and I packed into our Prius and drove to the Central Valley. We met the family in a Walmart parking lot to see their litter of puppies. As we viewed the dogs, a Walmart security guard approached us and told us to leave—no sales allowed in the parking lot. So we headed across the street to their apartment and spent several minutes playing on the floor with the six or seven salt and pepper-colored puppies. Romeo stood out because he had the darkest hair and eagerly jumped into our laps. We had met the new love of our life. He was so tiny that the Dairy Queen cones we bought on the way home were bigger than him (maybe a slight exaggeration). 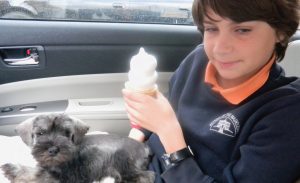 For the next couple of nights 12-year-old TJ slept next to Romeo on some blankets in the living room. Romeo couldn’t go down the stairs yet and he made no noise at all. I thought, “Wow, I’ve gotten lucky and found a Schnauzer who doesn’t bark.” That theory died quickly. After a few weeks Romeo found his voice—and his perch in the front window. He hasn’t stopped barking since then.

Despite his vocal chords, Romeo’s been a sweet and loyal dog. He loves to play with his rope (average lifespan of a rope=3 months), race in the backyard and cuddle. If I’m gone overnight he often sits out all night in the living room waiting for me. And he’s gentle with our cockatiel, watching but never pouncing when it struts around the carpet or flies from room to room. The only thing he’s ever destroyed is a stuffed animal—well, maybe all the stuffed animals we’ve ever owned.

I’m not entirely sure we’ll be successful at this training. Again, it’s mostly dependent on my dedication of practicing each day. I have no doubt Romeo has the brains to handle it. At the very least, he now knows he gets treats when people come to the door. We’re resetting his brain to think positively in stressful situations.

Can a dog really learn to relax on command? In addition to lying down on his mat, Sara’s final task for us this week was to start training Romeo to rest his chin on a pillow when I say “chin.” Later we’ll remove the pillow and he will just rest his chin on the mat. It’s as if I’m training him to meditate on command. If he masters this one, I think we both deserve a reward.

One thought on “Adventures in dog obedience training with Romeo and Sara: Part 2”