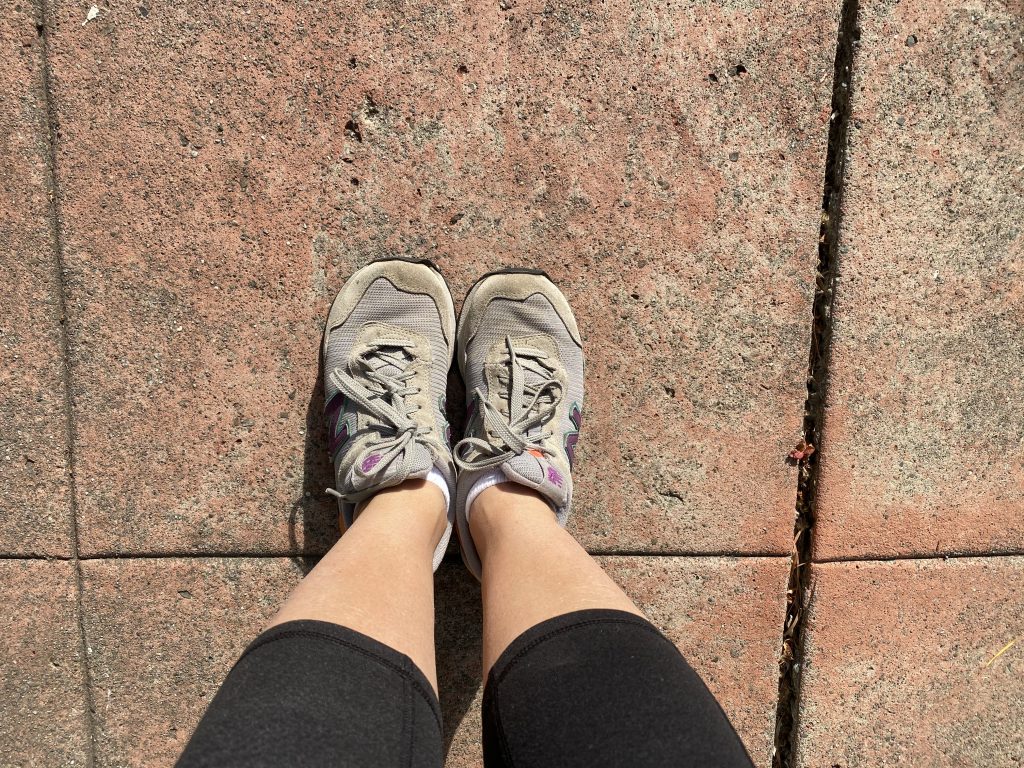 I don’t really have a bucket list. If I did though, one of the items at the top would be walking the Camino de Santiago, the ancient pilgrimage route that runs through Northern Spain. I have always dreamed of taking a month off to walk the route and perhaps discover what draws people from around the world to make the journey every year. I’m getting my chance now to do the Camino, only this one is virtual. It’s not the same as going to Spain by any stretch of the imagination, but during this Covid time it’s the closest I can get.

What’s a virtual Camino? During the month of July, I’m walking one day a week on paths close to home and listening to an accompanying audio program full of beautiful poems, music, insights, and scripture readings. I’m one of several hundred “pilgrims” doing this Camino virtually through InterVarsity Christian Fellowship. (I participated in IVCF when I was a college student and have supported their work ever since.) It’s only an hour a week, hardly anything compared to the full days of walking people do on the actual Camino, but it’s a deep hour.

So far the Camino has been a wonderful antidote to the anxious times we live in. Before starting week one, we were invited to journal our hopes for the upcoming pilgrimage. I wrote simply “to be with Jesus.” I often feel busy and overstimulated by news, social media, tasks and projects. I know it’s good for my soul to rest and unplug but I don’t do that often enough. The virtual Camino, however, demands that I slow down. I appreciated the first week’s reading of Psalm 23 (“The Lord is my shepherd”) and the chance to try breath prayer as I walked. I enjoyed the Spanish guitar music in between the readings and commentary. The second week’s program included one of my favorite poems by Mary Oliver and an exercise in experiencing the five senses.

Peter and I are doing this Camino together, walking alongside each other, but listening to the audio content through our own phones. I never thought we’d experience the Camino this way. In another lifetime, before we had kids, we drove and camped much of the route of the Camino when we spent half a year in Spain in 1993. 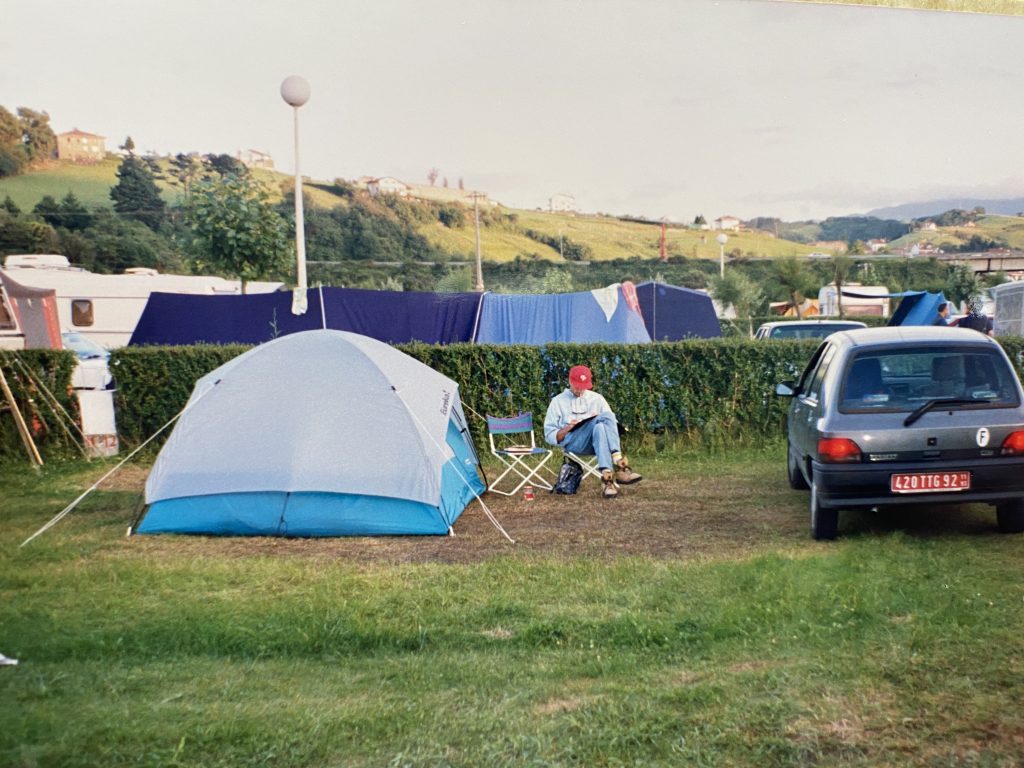 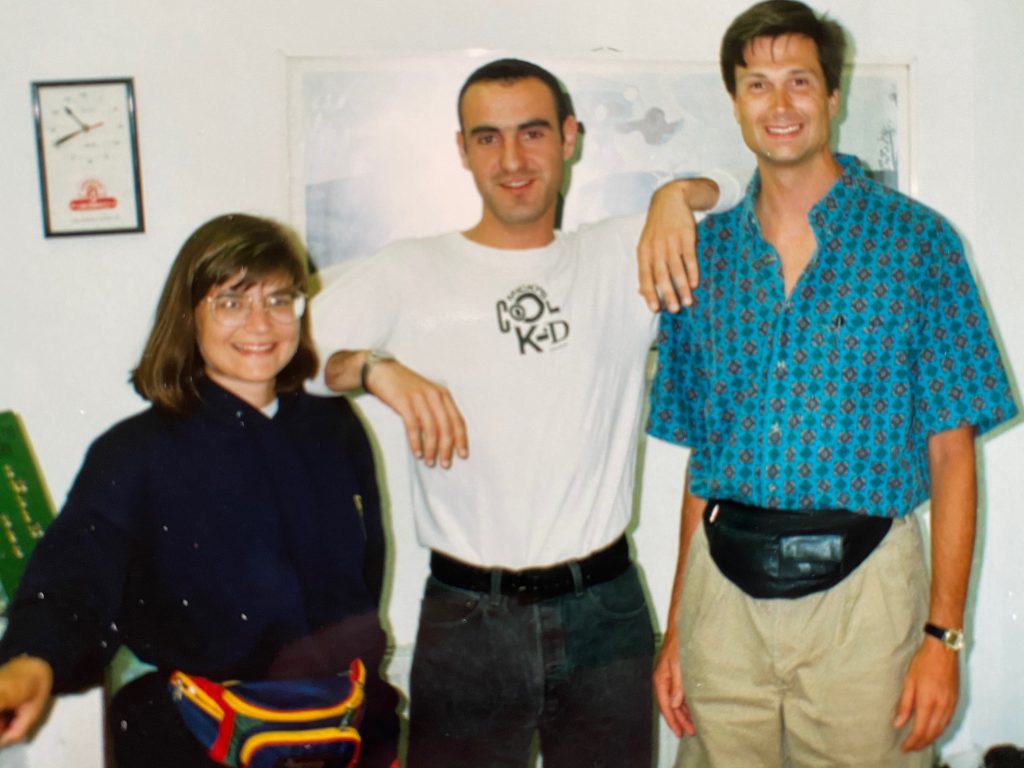 At the time we only knew of the Camino vaguely. We had come to Northern Spain to research family history, eat tapas and make friends. But we began to put two and two together when we saw people with backpacks and walking sticks all heading toward the direction of Santiago de Compostella, on the northwest coast. Then we noticed the albergues (hostels) catering to the pilgrims and the signs with shells on them signifying the Camino route. These pilgrims had walked sometimes hundreds of miles on their journey, seeking spiritual, physical or personal goals as they made their way to Santiago, the city of St. James.

By complete chance, that summer of 1993, Peter and I ended up in Santiago on July 25, the feast day of St. James. Not only was it the feast day, but it was a “jubilee” year, which happens when the feast day falls on a Sunday. St. James is the patron saint of Santiago and his remains are believed to be buried in the cathedral. In 1993, according to the American Pilgrims web site, 100,000 people walked the Camino. Previous years’ totals hovered around 10,000.

Peter and I knew little of this history that day. The day we arrived in Santiago, we parked our little leased Renault outside the city and made our way on foot to the 1,000-year-old cathedral. There were throngs of people speaking in various languages crowding the main plaza. We joined a stream of pilgrims waiting in line on the cobblestone plaza to enter the cathedral. Should we really go in? We felt a little bit like we were cheating since we hadn’t walked the Camino, but we still wanted to see the inside of this magnificent building. Finally we got our chance to enter, following pilgrims in their dusty hiking boots. The space was soaring and smoky. A priest stood in the front of the church pulling on a rope, swinging a massive botafumeiro, a large container burning incense. When we approached the altar, we got ready to hug a gold replica of St. James, just as our guidebook suggested. Later, when we exited, even more people had gathered in the plaza and were spilling out of restaurants serving the local delicacy, pulpo (octopus). Fortunately, we waited around to see what the fuss was about and were treated to a grand fireworks show. The night sky lit up with color against the backdrop of the ancient cathedral and oohs and aahs from the crowd. 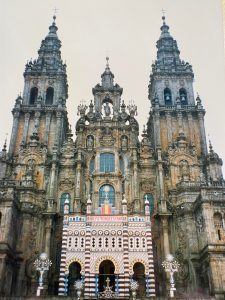 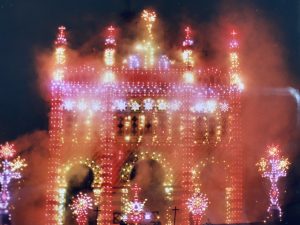 Walking the streets and hills of Berkeley won’t be as exhilarating as that accidental Camino we experienced in Spain. Given our shelter-in-place though, our virtual Camino is exciting enough for me now. And there will be “extras” that give us a little taste of the Camino life. This past week we had a chance to Zoom with several participants, much like pilgrims on the real Camino get to swap stories in the albergues at the end of the day. Next week there will be a virtual wine tasting and Spanish cooking night and another week we are invited to watch “The Way,” the 2010 movie about the Camino starring Martin Sheen. Since I love anything Spain, I’m happy.

There’s still time to join this Camino. If you’re interested, you can visit: https://gfm.intervarsity.org/events/faculty-digital-camino The organizers are open to newcomers at any time. All it takes is a phone and the patience to download the audioguide—and do the one-hour walks. The Zoom meetings are optional.

Here’s Mary Oliver’s Summer Day. As Peter says, the last two lines are one of the best expressions of how to live life as any you could find.

One thought on “On a pilgrimage, during Covid-19”