Every morning after I wake up these days, I sip my coffee and hunch over my phone for far too long. What has happened overnight in our Covid-19 world? I’m afraid to know but I want to stay informed.

It’s bleak. I read stories of relatives who can’t be present with their dying family members. I read about healthcare workers who still don’t have enough protective equipment. I read about people losing their jobs. It’s enough to shake my faith. To make me question.

Yet I continue to believe. Among the stories of suffering I hear about amazing people who are on the front lines serving as doctors and nurses. I watch teachers adapting to Zoom classes. Yes, God seems to permit suffering but there is so much good in the world too and that is equally unexplainable.

In these times I’ve found myself remembering past crises, both global and personal. Often, I remember my friend Phil. He almost died 15 years ago. In the space of a few days, our community came together to support him in a way I’d never seen before. I share his story now not to say that every story has a happy ending but only to remember that love, prayer and grace are real.

It was a typical Monday morning in November. I had just taken the kids to school and I sat down to check my e-mail. The first one I saw said “Pray for Phil.” It wasn’t unusual to receive prayer requests from my church community, but as I read this brief message I was alarmed. Phil, a good friend and pillar of the community, was in intensive care with a severe case of bacterial meningitis.

“He is fighting for his life,” the e-mail read. “Please pray.”

I tried to eat breakfast, but I simply moved the cereal around in the bowl without eating. How could Phil, one of hardiest people I knew—and only in his mid 40s—be struck down so suddenly? Hadn’t I just seen him a week ago in his usual place in the church foyer greeting people coming to church? 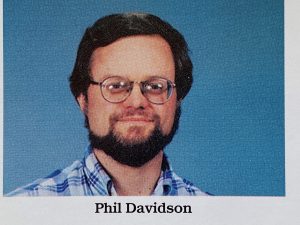 Soon, I would learn more details. Phil had battled a nagging cough for the past few months and it had recently turned into a sinus infection. Sunday night he spiked a fever of 106, was unresponsive and his wife called 911. He was now in a medically-induced coma, on a respirator. The doctors gave him a slim chance of survival, and, if he did survive, almost certainly some combination of permanent brain damage, blindness, paralysis and terrible headaches.

Phil was one of the most intelligent people I knew, able to remember arcane pieces of our church history in the middle of a congregational meeting or cite key passages of scripture to encourage someone at any moment. I couldn’t imagine Phil without his sharp mind.

I checked my e-mail again an hour later and saw a new message: “Prayer vigil for Phil.” Jeremy, a young member of the church, was hosting an all-day vigil in the church library. I immediately grabbed my purse and headed for the door. I was glad I could do something to help. I believed that praying with others carried a special power—and what we needed now was a miracle.

I had met Phil fifteen years earlier when I first joined the church. At that time I had just graduated from college and I was exploring what it meant to be an adult and establish my own life. Phil seemed to exemplify what I was looking for. He was ten years older than me and had put down his roots in this church a decade earlier, serving on the board of elders, starting a Bible study group and always ready to help repair the leaky church tower or bring a dish to our annual Swedish smorgasbord.

But Phil wasn’t just a dedicated church member. He had a nerdy side (he was a computer programmer) that often made my husband and I laugh. Robert’s Rules of Order was like a second Bible for him and he always carried a copy to church meetings. Not surprisingly, he was a Trekkie and invited us to join his group that watched reruns on Sunday nights in the Fellowship Hall. I couldn’t imagine the church without Phil.

I admired Phil in many ways. He had the kind of dedication and frugality that I had only seen in my grandparents’ generation. He rarely used a car and instead rode his bike. On Sunday mornings he arrived at church with an elastic band around one pantleg to protect it from the gears. He took off his jacket to reveal a neatly pressed plaid oxford shirt that still looked crisp and sweat-free.

I remembered all of this as I prayed for Phil. In the years since I had met Phil, the church had become my tribe. I had found friendship, shared faith and a place to raise my kids in this community. It was hard to think of losing one of our members, especially one so young. We were a small group—less than 100—so we felt each other’s triumphs and pain acutely. 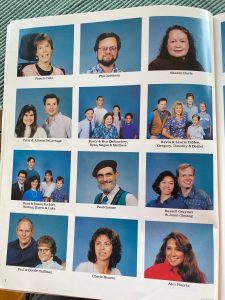 By mid-day on Monday, the church was fully mobilized in a way I hadn’t seen before. Our pastor, Phil’s wife Karen, my husband, and others were with him in the hospital sending regular e-mail updates. When I prayed that day I sensed I was part of something powerful, one of many voices speaking together.

Our pastor confirmed my experience. “I felt like I was a part of something holy all day,” he wrote that evening about the outpouring of support.

Meanwhile, the doctors were flooding Phil’s body with antibiotics to fight the disease. The previous summer at the same hospital a college student had been admitted with meningitis and had died. Remembering that incident, the medical staff acted quickly, hoping to bring Phil’s fever down and stabilize him.

We had all already witnessed a miracle of sorts in Phil’s life a few years earlier. When I met Phil he was single and seemed content with the situation. He dated occasionally but was afraid of commitment. Most of us assumed Phil would be a bachelor for life.

Then Phil met Karen, a widow about his age, at a Christian singles dance group.

On their first date, Karen asked Phil, “What’s God doing in your life?”

Karen was impressed with Phil’s honesty. They were married at a big church wedding a year later when Phil was 44.

Phil points out today that if he had still been single at the time he contracted meningitis and lost consciousness at home, he wouldn’t have made it to the hospital in time—or maybe at all.

Fortunately, the antibiotics worked. By the end of the day Monday, we received news that Phil’s fever had come down. He was stable but still unaware of his surroundings. The doctors would try to remove the ventilator Tuesday and assess the damages.

“Tomorrow will be a very hard day,” my husband wrote to the church after visiting Phil. “When the sedation is reduced, that means Phil’s pain will come back and he will have the headache of his life…Please pray for continued healing.”

That night at dinner, we explained the situation to our small boys, ages 8 and 5, and we prayed for Phil.

Tuesday came and the doctors tried to bring Phil out of his coma. He was highly agitated, however, so they decided to wait. At the very least, they determined that Phil hadn’t suffered paralysis or hearing loss, since he responded to his name. But tests on his pupils showed he couldn’t see, a typical symptom caused by the swelling in the brain.

“Pray that God will restore Phil’s vision,” Karen wrote Tuesday night. “I ask that you join me and cry out for God’s merciful healing – that the MRI will reveal no damage.”

Wednesday noon we received the next update.

“Phil is coming to,” our pastor wrote, “and in the words of Karen, he is all there. At one point, she said he had the presence of mind to be grumpy! These are all very good signs, church. In fact, the doctors and hospital staff have not hesitated to put this whole situation (thus far) in the category of miracle.”

Over the next few days Phil gradually recovered all his senses. He stayed in the hospital for three more weeks. His only lasting damage was minor hearing loss in his right ear. It wasn’t long before Phil was back at church, just as involved as ever.

Before this crisis, Phil’s life had been all about building up and supporting the church. He couldn’t have planned it, but his illness unified us in deep and lasting way. Even now, years later, our pastor still reminds us regularly of “Phil’s miracle.”

When telling his story today, Phil remembers the details well. But if you ask him how it changed him, he pauses a bit. Then he says simply: “If I wasn’t grateful before, I am now. The hospital told him me they had never seen anyone fully recover from bacterial meningitis.”

“I confess that before Phil got sick, my attitude about prayer was, ‘God is going to do what God is going to do, so why bother praying,’” Karen says. “The doctors said that Phil was going to die; or if he lived, he would never be the man I knew before his illness—that meningitis would so ravage his brain, that I would wish he had died. It was hopeless, so the only thing I could think to do was to pray—and to ask others to pray with me.”

Prayer brought an incredible amount of peace during Phil’s crisis, Karen says, and since then she and Phil have experienced a deep sense of God’s compassion in their lives. They’ve been able to sit beside others who are suffering, in the hospital or at home, and offer prayer and support.

“Since God so magnificently answered our prayers for Phil’s life, it has been easier to trust Him.” Karen says. “This doesn’t mean that God will ever give us another physical healing as a result of our prayers. It doesn’t mean that He will always answer “yes” when we pray. But it does mean that God hears the prayers of his people and that we can trust in His compassionate answer, and we can praise and glorify His name.” 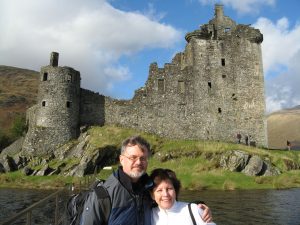 Phil’s story is perhaps just that of one man and one community. It’s different from this massive crisis we are in now. Or is it? We are all just individuals facing various challenges in our altered world, some minor and some severe. Despite the overwhelming nature of any particular situation, we have power in our actions and prayers. For Phil, it took a team of doctors and praying churchgoers to rally around him. It makes me wonder how God might be calling me to live and trust Him in these uncertain times. Even now, in our shelter-in-place worlds, there is much we can do.

Thanks to Phil for recounting his story to me and reminding me of God’s love and power. 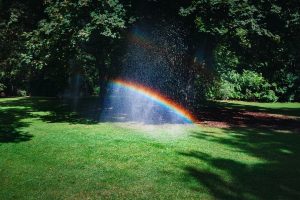