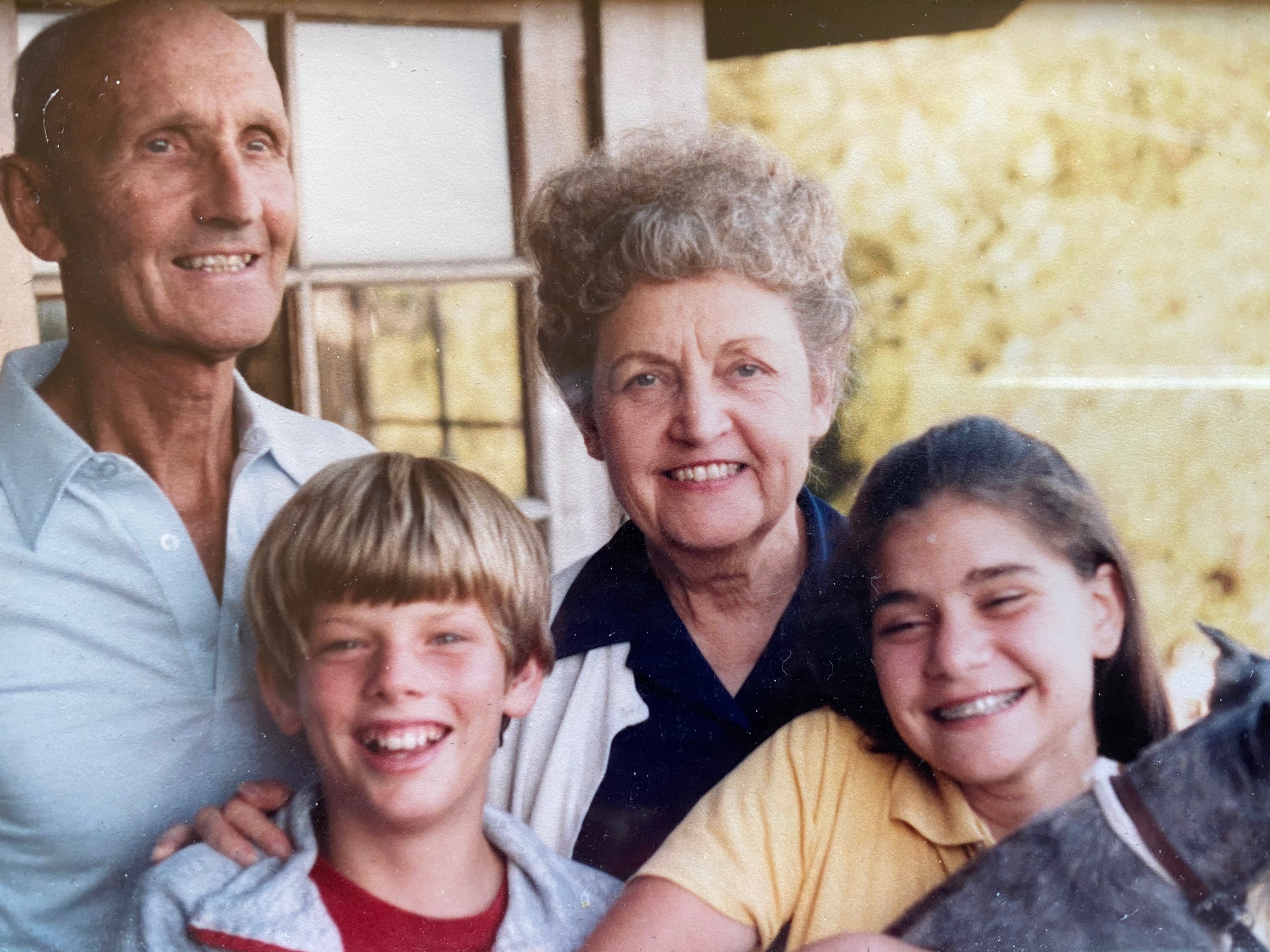 In mid-March, after California Governor Gavin Newsom ordered shelter in place, my mom and I commiserated over the phone.

“It’s going to be tough to stay at home for a month,” she said, not knowing then that our stay-at-home orders would eventually stretch until June and then this month begin again, encompassing the entire holiday season.

“Yes,” I said, talking to my mom, but then a thought popped in my head. “Grandma would be just fine with this. We all need to be just like Grandma.”

My paternal grandma, who came of age during the Great Depression and become a devoted homemaker, loved to stay at home. In her mind, the depression had never really ended. She ran a tight and efficient ship, carefully planning meals, wasting nothing and enjoying simple family times.

In many ways, Grandma was probably like a lot of grandmas for those of us in my generation. We never really understood our grandmas and maybe even chafed under their rules. But these past months, I, for one, have thought often of my grandma, who passed away more than 10 years ago. I’ve come to see that her way of life contained lessons for our long slog through lockdown. They’ve served me well through the ups, downs and even a deep depression.

“Who is going to be a member of the clean plate club tonight?,” my grandma would announce during each meal.

Although I loved Grandma’s always-from-scratch meals–hearty pot roasts and thick meatloafs–I could never quite finish them. I usually moaned and looked to Grandpa to help me with a few bites.

At home during shelter in place, I didn’t enforce the clean plate club, or her advice to chew every bite 32 times for maximum digestion. It would be a bit extreme with my 20-year-old son. But in these rare days of sharing family dinners every night, I have relished the satisfaction of unhurried, home-cooked meals. Maybe Grandma had more on her mind than digestion and finishing our food when she slowed us all down at the table. What her “rules” did was give us more time together.

“Now let’s clear the table and we’ll get out the dice,” was Grandma’s usual after-dinner refrain.

Grandma always made time for after-dinner games. We too, like many others, have rediscovered the pleasures of old games during lockdown. Instead of retreating to our computers after dinner, my husband and I challenged each other to Rummikub, Spite and Malice and other games from our parents and grandparents. One night my husband teared up when he saw his belated mom’s handwriting on an old score pad. I soon cleared out a shelf in the kitchen so the games would be handy to reach. That took on new importance when I suffered a long period of depression this fall and could do little more than play games every night. We logged literally dozens and dozens of hours playing games. Somehow, sliding the colored Rummikub tiles around the table and studying the possibilities to create runs and pairs calmed my mind and anxieties.

In so many ways, Grandma’s life was not much different than our quarantined ones. She loved cooking and cleaning, watching soap operas, and playing Bunco and Bridge. She rarely drove (only obtaining her license in her ‘50s), almost never went out to eat and never got on a plane. Grandma took pride in her clean house and hot meals and that was enough for her. Growing up, I never understood why Grandma kept her world small. Now I see that a life stripped down to essentials has a quiet pleasure of its own. In lockdown my house never looked cleaner or more organized;

Initially, I was energized to tackle creative projects and have longer conversations with family and friends. When depression set in last August, my creativity dried up and I thought it would be gone forever. I continued to make lists of things to do but they never got done. Thankfully, I emerged from that abyss with a lot of support. It strikes me that depression wasn’t really in Grandma’s vocabulary and she wouldn’t have understood it, but I bet she would have been right there with me helping in her own ways. She was tough but could also be tender.

Grandma’s iron rules around the house sometimes irritated Grandpa and they bickered. I can see why. After months of sheltering in place with my husband in the room next door, we have had our share of arguments. But I also remembered how Grandma maintained a tenderness toward Grandpa. After 50 years of marriage Grandma still laughed at his corny jokes and seemed impressed by his disappearing coin tricks. Maybe it’s a matter of perspective. When I get frustrated that my husband again forgets to turn down his Zoom call, I laugh and think of how lucky we were that we were financially stable during this perilous time. 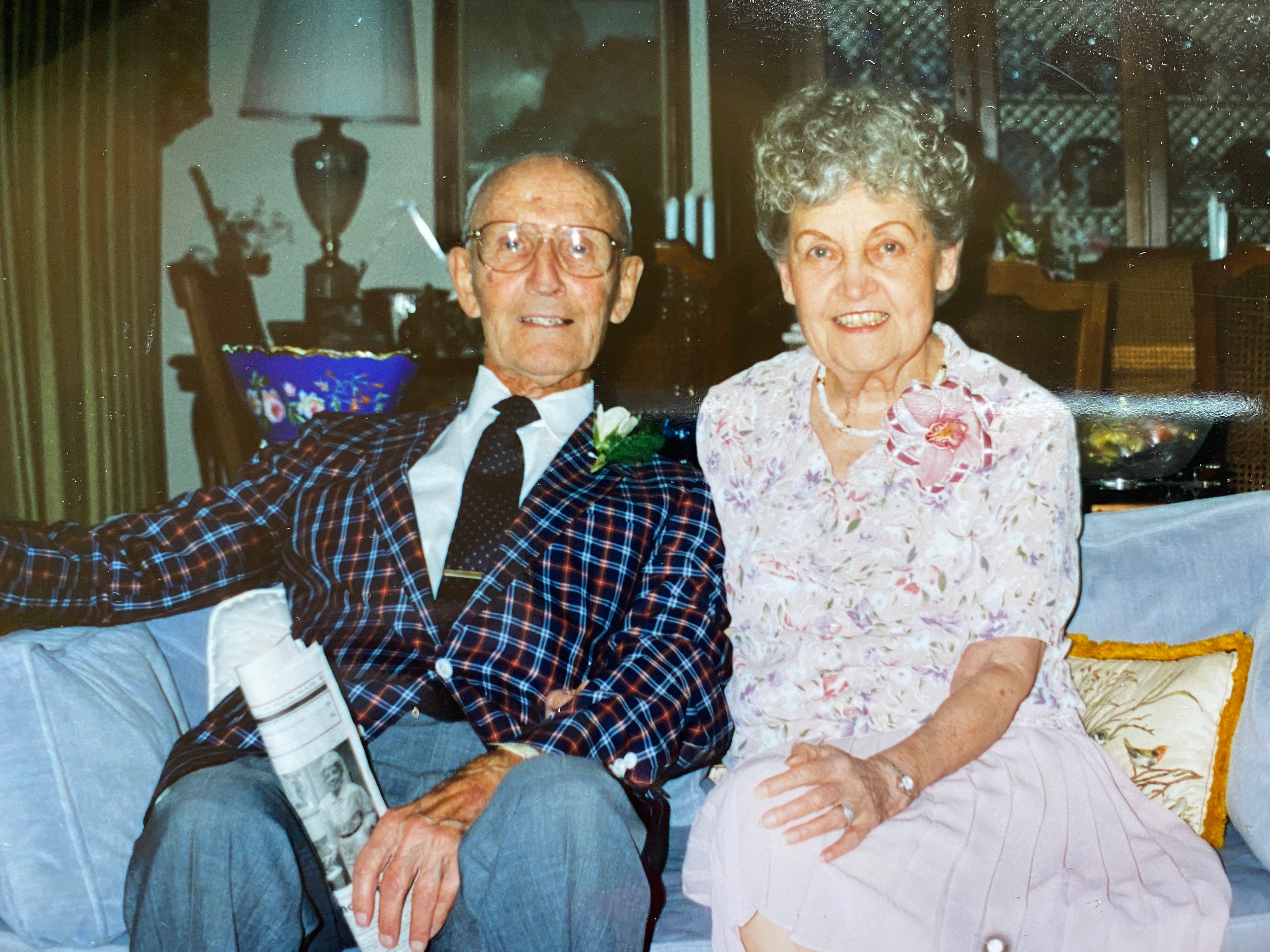 I got to know my grandparents well because they came to visit us in the Bay Area for several weeks every year when my parents took an adult-only vacation. My brother and I struggled to meet their level of Depression-era frugality. We were lectured if we left the lights on in an empty room. We weren’t allowed to snack between meals. We might have resented the strict rules if we didn’t find some of them downright comical. My grandmother, for example, would ask us to carefully examine our paper napkins after each meal and save the gently used ones at our place for the next meal. Grandpa, meanwhile, assigned us each our own tiny ceramic dish where we could deposit gum we were tired of chewing but still had life in it. I wonder today, in our Covid-19 reality, what habits have I adopted that will follow me forever, even when they outlast their necessity?

Like our life today, Grandma’s was affected by circumstances out of her control.

She was 20 when the stock market crashed in 1929. At the time she was living with my grandpa’s family because her new stepmom had thrown her out of the house. Grandma and Grandpa were married in June 1931, three days after my Grandpa graduated from college, and at the height of the depression.

With financial constraints and limited opportunities for women, Grandma never had the chance to go to college. She would have made a great accountant. She kept meticulous records of her bank accounts well into her 90s and memorized every score of her beloved Chicago Cubs. Instead she became a housewife, a job she mastered as she raised two sons and moved around the Midwest while Grandpa managed commercial laundry businesses. Some years they lived in pretty single-family homes and others in cramped one-bedroom apartments above the laundry. She and Grandpa retired to a modest house in Arizona where she continued to do all her own cooking and cleaning. I realize now that I never heard Grandma complain about her position in life or the curve balls life had thrown her.

I’ve had many more opportunities than Grandma. I’ve gotten two advanced degrees, held various jobs, traveled the world, and enjoyed concerts and dining out. I’m grateful for that. Now, however, I see that even the post-quarantine world will look much different. Travel is still a ways off. Dining at restaurants won’t return for a while. So instead, I tidy one more neglected drawer or find another creative way to use leftovers. Grandma would be proud.

As I set the table for one more family meal the other night, I remembered how Grandma would heat the plates before dinner, just as if we were in a fancy restaurant. It was one of her special touches. Yes, her world was small, but it was rich and generous too. In her mind, she lacked nothing. In my post-depression emergence, I realize that I also lack nothing. My joy has returned 10-fold.

With the Christmas season here I do wonder if Grandma, if alive now, would still be coping just fine. I can see her shaking her head about the politics, the suffering people. She’d be praying and reading her Bible. She’d miss going to church. But as long as we could have been together, she would have been happy. Her love of family trumped everything else. She was never happier than thinking about what to prepare for us next. Her love was pure, simple and unrestrained.

In her later years when she became a widow Grandma’s sons called her every night to check in. She was fortunate to live in her own house until the very end—she was 97—and cared for by two devoted Polish ladies. I miss Grandma. I wish, just for a night, she could sit at my table, eat my dinner, laugh at one of Grandpa’s old jokes and play a spirited game of dice.