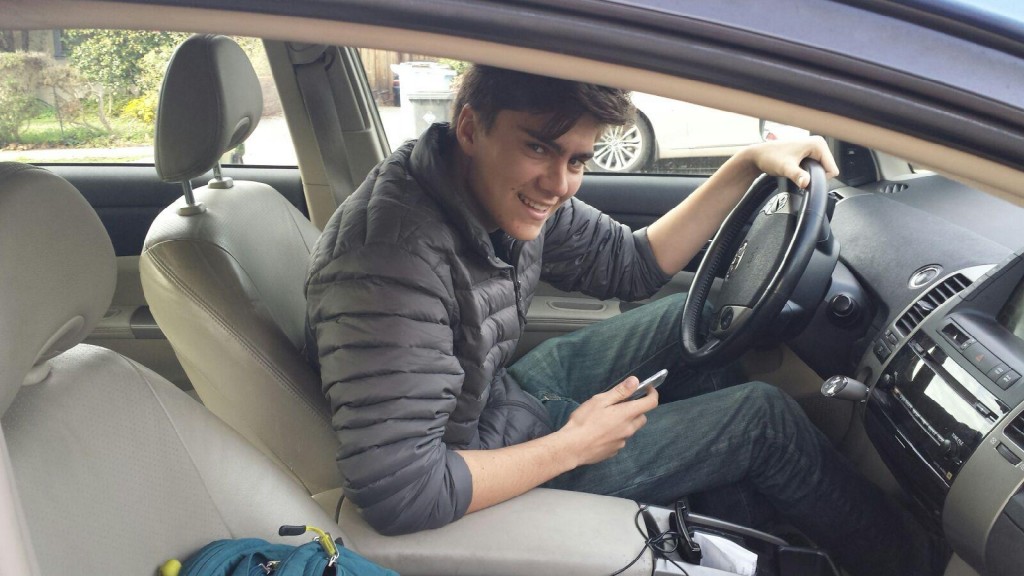 A week ago my son and I went to the DMV at 8 am so he could take his driving test. It would be his second try and I waited nervously in my hard plastic seat while a computerized voice called out numbers over a loud speaker. I tried to read the newspaper to distract myself, but I kept wondering how the test was going. Would Miguel make a big error and automatically fail like he did the first time? Would he forget to do a few simple things like turn on his blinker and lose points? Miguel was a good driver but sometimes the testers were extremely picky. In fact we went early with the hopes that the testers would be rested and cheerful.

As it turned out, the second time was a charm. The text taker was friendly and polite. In what seemed like about 10 minutes, Miguel was done, proudly showing me the paperwork that showed he passed. He got in line to take a photo and that was that. He was a new driver. At age 18, he had finally gotten his license. We celebrated by going out for gourmet donuts on Telegraph Avenue.

Having a new driver in the house has been one of the biggest changes I’ve experienced as a parent. It’s changed our family dynamics in the space of a week. On the one hand, it’s good: I am no longer the shuttle driver for one of my kids. I can sit back and relax while he takes himself places. He’s driven to see friends, spend time with his girlfriend and even visit his grandparents. On the other hand, I feel wistful. Trips in the car were always a good time for conversation. I think of all the places we’ve gone—school, soccer games, baseball practices, swim lessons, friends’ houses—and realize we have spent hours and hours traveling together.

Driving is a rite of passage for teens in the U.S. and I can still remember the thrill I felt when I started driving. Unlike my son, who has grown up in Berkeley, I grew up in a small suburb in Marin County and almost everyone got their license when they turned 16. I was eager to stretch my wings and explore new places beyond my little town. Soon, to the consternation of my parents, I was driving to San Francisco and Berkeley, both about 40 minutes away. In San Francisco my friends and I hung out in North Beach, discovering funky little shops and good pizza. In Berkeley we walked up and down Telegraph Avenue, sampling more pizza and shops and mingling with college students. We felt sophisticated and free. The world was ours to explore.

I know that driving is one of the many steps toward adulthood my son will make this year. In less than a year, he’ll be on his own, doing his own laundry and keeping track of his money and schedule. He’ll enjoy more freedom, but also more responsibility; I have no doubt he’s ready.

In the meantime, while Miguel is still home, we have plenty to bond over. Miguel keeps me current on technology, music and culture. Last year he got me started on using Apple Music on my phone. I had no idea you could have access to every album ever made (almost), at the touch of button. Now I understand why no one buys albums anymore. On the TV front, recently we started watching an HBO show called “Newsroom,” about a fictitious TV station. We’re watching that via Amazon Prime, which was a revelation (again) to me. I didn’t know that our Amazon membership included TV shows. Through Miguel I’ve also discovered the comedian John Oliver (outrageous but funny). Most curiously, I’ve made many “appearances” on Miguel’s Snapchat feed. Why he likes to post pictures of his mother on Snapchat, I don’t know, but many of his friends meet me for the first time and they already recognize me from Snapchat.

Fortunately for me, I am blessed with two sons, so I have another one at home for several more years. However, I realized the other day that my younger son could be driving in a year as well. If he’s like his brother though–and lots of other kids in Berkeley–he won’t get his license right away. That’s just fine with me. We have lots to bond over too, such as our shared love of reading (“The Girl in the Dragon’s Web” is on our Kindle now), our pets (dog and bird), and good snacks (peanut butter on banana is the current favorite). Driving can wait a while.

Am I nervous about having a child behind the wheel? Less than I thought. Fortunately children take many small steps between the big ones. Each step prepares them and their parents for the next one. Mostly, I’m happy to see Miguel grow up, enjoy adult responsibilities and make good decisions. I don’t know if I’m yet prepared to see him drive across the country on a road trip (which he has mentioned once or twice), but we have many steps before that happens. Now it’s just across town. Next week he plans to pick up friends at the airport. Next February he’s driving to a concert in Sacramento. We’re moving right along at just the right speed.