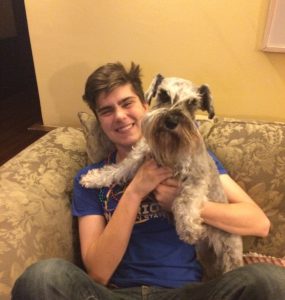 This was our second week of dog obedience training. I say “our” because it’s training both for Romeo and me. It’s still early in this process, but I am hopeful that I can teach Romeo—not exactly an old dog at age 7, but not a young one either—new tricks.

I made an appointment with Sara, our dog trainer, a few weeks ago after reading a glowing review on NextDoor. Sara seemed to have the right pedigree–professional training, experience, and a humane way of training. Mostly, I wanted Romeo to behave better when people came to the door or out on walks. He’s a loving and playful dog but gets nervous and barky around strangers.

Now that my kids are gone, I figure this is a good time to get around to paying more attention to the dog. Romeo really is like our third child. He’s been a great companion and these days he and I often commiserate on the couch about how quiet our house has become without the kids. No one walks through the door at three o’clock eager to play with him anymore. I just don’t have the same touch playing tug-of-war as the boys do.

On Sara’s first visit, she observed Romeo, asked me a lot of questions and determined he was quite nervous. He sits on the couch all day long and barks at people passing by the front window. Even when he’s not at the window, he hears noises outside and gets agitated. This elevates his stress, she said. When someone rings the bell, he’s already worked up. She recommended a few measures to calm him down, like putting a white noise machine in the living room to screen some of the noise.

Next, Sara taught me to use a clicker, a small device that makes a clicking sound. I was to click the device every time Romeo sat calmly at my feet. Then I would throw him a treat as a reward. I’ve been practicing this for a week and a half and he mostly gets it. The hope is that he’s learning to sit calmly and will eventually do this even when a guest enters and even without the clicker.

Even in two sessions, Sara has taught me a lot about dog behavior. She points out how Romeo sometimes shakes himself out during our training sessions or on the short walk we took today. This is a calming behavior, she says. She points out the difference between his barks for attention (for play or treats) and his barks of nervousness (like when she came over the first time). When I told her how Romeo often licks his feet at night, she diagnosed that this was also likely a way to soothe himself. She recommended some new dog toys that would also provide this soothing.

I asked Sara why Romeo is so nervous around new people when no one has ever treated him badly. He’s also nervous when anyone—even I—try to touch his head. She wasn’t sure, but conjectured that it might be a trait he inherited from his parents or could have been caused by stress on his mom during pregnancy. Or it might even be something inherited from a grandparent. Researchers have discovered that epigenetics is a real phenomenon in dogs, she said. I was shocked. I guess dogs really are a lot like humans.

The next two weeks we have several guests coming to stay with us. Sara says the guests should ignore Romeo. Any attention they might give may reinforce some of the behaviors we’re trying to change. This will be a challenge as people naturally want to interact with a dog and get him to like them. But right now Romeo and I have to focus on our clicker training and calming mechanisms. We have a job to do.

I really don’t mind Romeo barking a little bit. He’s naturally protective and a good watchdog. Hopefully though, he can learn to relax when I tell him things are safe. (He’s especially wary of large men.) We’ve even had to resort to using a shock collar to curb the barking at times. Sad, but true. It works so well we don’t even have to turn it on now. But obviously, this isn’t a good solution. As Sara said, this reinforces his fear and nervousness.

So, here we are, starting anew, teaching old dogs new tricks, one click and one treat at a time. It’s not a bad gig. The world has so many problems and complicated issues. It’s nice to lose myself in the world of me and my dog.

6 thoughts on “Training the third child”